The “Red Light District” is Real

If I thought London was cold, I was in for a surprise – Amsterdam was colder! When we finally made our way out of Schiphol Airport I wanted so badly to get into a vehicle to escape the cold. My denim jacket wasn’t helping me at all. But the group proceeded to spend the next 20 or so minutes in front of the IAMSTERDAM sign. Then we missed our first bus to the hotel. We decided to take public transportation because the bus took us right in front of the Amsterdam Marriott where we were staying. We were lucky this time to be joined by my boyfriend’s sister who lives in Amsterdam. In addition to being such a warm and fun person, she also spoke the native language.

After checking-in and dropping off our luggage, we decided to head out for something to eat. For me the temperature was so cold that I considered staying in. To make matters worse it started to rain just as we left the hotel. We went to a nearby Hard Rock Cafe for lunch. The wait for a table was long and the food was expensive. But the food was good and we got so comfortable that we didn’t want to leave. Our 3:45 am wakeup call earlier that day probably also had something to do with our sluggish mood.

We finally left to explore the area. A member of our group had been patiently waiting for this leg of our trip to experience the “cafes.” From since we were in Paris he had been waiting for his “medicine.” As we walked around I was startled by the electric trams which seemed to appear out of nowhere and drove through what I thought were pedestrian walkways. We walked in and out of stores in the drizzle. The day was wet, cold and dreary. Four of us headed back to the hotel, while two set out to find the cafes.

I crashed when I hit the bed. After about two hours I woke up and called around to see what the group was doing. They were asleep. Grateful, I went back to sleep again. We woke up a few hours later and headed out. It was night by then. And I wanted to see the Red Light District.

The hotel’s surrounding area had blocks and blocks of stores, which were all closed. The city looked like it was asleep. The further away from the hotel we walked, the more the nightlife came alive. There were lots of bakeries and other eateries, which I had grown accustomed to seeing in Europe. Out of the blue our friend who had gotten his “medicine” earlier walked into this eatery. This move was new to us because he was not a fan of sweets like the rest of us were. He ordered a waffle with ice cream and began raving about how good it was. He offered everyone some and they all decided it was great. It was already cold, and the thought of ice cream made me feel even colder, so I passed. But when he went back and purchased a second one, I decided to try it. It was the best dessert I tasted in the whole of Europe! And I had been eating a whole lot of dessert since I landed in France. The waffle was nice and warm – slightly crunchy on the outside, nice and soft on the inside – lightly sprinkled with powdered sugar. The ice cream had a smooth caramel, butter pecan, vanilla flavor. It also had a few candied nuts. It was awesome! It was one of those things that you just want to eat slowly, to savor each bite. And I’m not a foodie. But that dessert did it for me. I could have gone back to the hotel and called it a night.

I guess I wanted to see the Red Light District, because in my mind it couldn’t be real – legal prostitution where women are displayed in window fronts selling their bodies! From afar we saw the red lights. We got closer, and I was still in disbelief. The women on display looked like Victoria Secrets’ models. They were slim, beautiful, fully made up and wearing some of the sexiest lingerie. The fact that they were selling their bodies still didn’t seem real to me. The guys in my group asked their price. It was €50.

Then we walked by a set of stairs and saw a man leaving a room zipping up his pants. Wow! It is real. How did these model-type ladies make it seem so easy? Was it easy to have a career as a sex worker? Continuing to walk around we saw more red lights on than off. I guessed that it was a slow night. But for each window where the lights were off and the curtain was drawn, I got this weird feeling.

Beside the sex for sale, the nearby area offered strip joints, live sex shows and the cafes. The night was beautiful. But watching groups of young men stroll the area deciding their pick of women had me thinking conflicting thoughts. First – this is true freedom, when a woman can choose the career that she wants. Second – this is truly sad when a woman must sell something so precious to make a living.

The further away we walked from the main area the women in the windows changed. They were no longer Victoria Secrets’ models look alikes. They looked like the girl next door – panties and bras, cheap wigs and in some cases cellulite. We decided to head back to the hotel. The walk back was especially cold.

At the hotel I used my Magic Jack app to call home. My mom sound worried. One of her nieces had suffered a stroke a few days earlier. While the whole family was praying for her and her recovery seemed miraculous, my mom wasn’t dealing with the situation too well. Mom herself had undergone surgery two weeks ago. I decided to fly back home the next day. 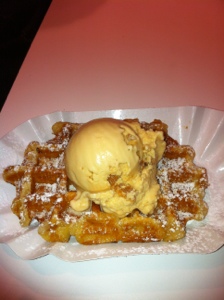