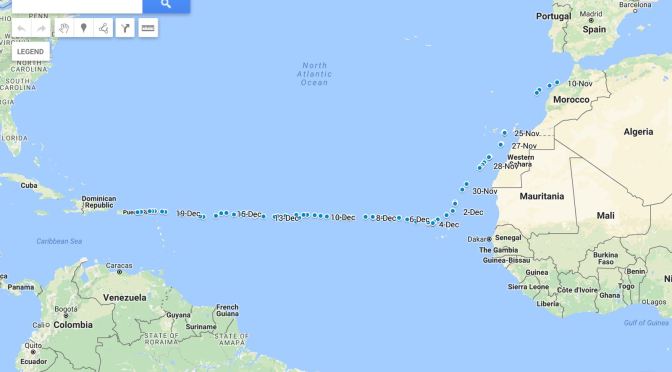 Henry Smith doesn’t have a boat captain’s license. But when he was asked by a former co-worker to help sail a boat back from Spain to the U.S. Virgin Islands (USVI), Smith said yes. “Since I’m retired I have the time,” reasoned the self-taught sailor. The thought of spending days at sea crossing the world’s second largest ocean didn’t intimidate Smith. Instead his first thoughts were on the fitness of the vessel, the competence of the others who would be sailing and how he would fare in small, confined space with people he didn’t know closely. Soon he told himself, “I want to have this experience. I’m going to have fun.”

Smith’s wife Peggy had no apprehensions about the trip. “I’ve seen him sail, so I know what he is capable of,” she said. He has sailed before to Anguilla, St. Martin and Antigua.

“He’s been sailing so long that I have confidence

in him that he’s not going to put himself in danger,” she said. “I was not afraid.” With Peggy’s support and his experience, Smith was ready for the adventure.

“To sail across the Atlantic was new, but I wasn’t at all a stranger to sailing,” Smith said. He has been on, around and in the water most of his life. Smith was born in Tortola, British Virgin Islands (BVI) to a father who was a carpenter and built boats. The younger Smith got his first boat when he was a child.

“We always lived close to the sea,” Smith said. When the family moved to St. Thomas, USVI, he had access to a bay in Bovoni on the eastern end of the island. Smith observed that his parents never objected to him and his brothers spending time in the water. But the children needed express permission to romp through the neighborhood.

“I could go by the shore and spend all day and they didn’t have a problem with it,” Smith remembered with a laugh. He would take his row boat along the coastline. “I got to know the east (coast) of the island really good,” Smith said. “I’ve always found a way to be around boats.” Smith pursued a career in water resources management, earning a Ph.D. in civil engineering with specialties in water resources planning and management and hydrology, and Juris Doctorate with a concentration in environmental law.

Since retiring from the University of the Virgin Islands (UVI) in 2015 as director of the Virgin Islands Experimental Program to Stimulate Competitive Research (VI-EPSCoR), Smith adopted an even healthier lifestyle than he practiced before – walking four miles daily, eating better and getting regular medical check-us. He was physically and mentally prepared for the voyage.

Glenn Metts is owner of the 49-foot offshore cruising boat Wind Walker and had made the north Atlantic crossing months earlier. He asked Smith to help captain the boat back to the Virgin Islands because one of his crew members was not returning to the Caribbean. The two had also previously raced together in a Rolex Regatta competition. Metts, who has a master boat captain’s license, said that preparation is the single most important aspect of an Atlantic crossing.

“Going off shore is extremely strategic,” explained Metts, who had begun planning the trip since 2014.

“Strategically speaking, it was one of the most complicated things,” the UVI professor of Management and Entrepreneurship said. “The preparation is so tough.”  It required multiple redundancy plans for mechanics, power, water, food and first aid. “If you get hurt, even for a simple thing, you can die,” Metts noted.

Metts also has been sailing since he was a child growing up in Florida. Always up for a new adventure, he planned this trip because, “I wanted to go across the ocean on my boat,” he said. He was on sabbatical when he set sail, and used the opportunity to collect data for his case studies.

Smith met the crew of Metts and his friend in Spain in November 2016.  From there they sailed to the Gran Canaria in the Canary Islands then to Mindelo in the Cape Verde Islands before they began the south Atlantic voyage. The three each had different “watches” where each person would have full responsibility for sailing the boat safely and on course. Smith’s watch was 2-7 p.m. and 2-6 a.m.

The morning watch was the hardest, Smith said. “At times it would be totally black.” He made sure to get plenty rest prior to his watch and to plan activities. Often he would journal or read on his Nook to ensure he wouldn’t fall asleep, ever aware that although it seemed they were alone in the wide ocean, they could come upon a tanker, meet drifting shipping containers or other debris, encounter bad weather or stray off course.

He soon fell into a routine. “Get up in the morning, there’s ocean. Go to sleep, there’s more ocean,” Smith said. Each morning the crew planned for the day ahead and each member briefed the other before handing off shifts.  “I didn’t pay much attention to what the days were,” Smith said. “That probably would have driven me crazy.” His idyllic free-time at sea was a departure from his hectic schedule at UVI where he held several senior leadership roles – sometimes simultaneously – during his 26-year career at the institution where he also earned his undergraduate degree in marine and environmental science. At UVI Smith had secured the institution’s largest grant – a $20 million National Science Foundation grant – to support VI-EPSCoR.

Across the Atlantic on Tortola, Smith’s brother Bennett –  also an avid sailor – tracked his coordinates and monitored the weather. Smith sent his wife and daughter regular e-mails, accessible via the satellite internet. There were a few weather squalls and gear failures. “We dealt with them like they were routine matters,” Smith said. “Sailing for that length of time and in those conditions, the weather will change and equipment will break.”

One of the highlights for Metts was experiencing a whale breach.  The two men were on the deck one morning when Metts noticed something. “An eight-story whale comes straight up from the water and crashes down,” Metts said. Smith’s back was turned to the action but the expression on Metts’ face alarmed him. “Glenn’s eyes got big, wide, and his mouth dropped open,” Smith recalled. By the time he turned around the only evidence was a huge splash. “It was unbelievable,” Metts said of the sight. Other highpoints included seeing pods of dolphins.

Although there are challenges every day while sailing, Metts said that south Atlantic crossing back to the Virgin Islands was much smoother than the north Atlantic crossing to Portugal.  On the first crossing, they came upon a storm with 30 foot waves and 40 knot winds with 4.6 seconds between waves. “They (the waves) were very close together,” he said. The wind was behind the boat and there was a danger that the boat could broach, Metts said. They needed to change direction. “Doing this in that type of wind was very difficult,” he said. The crew battled the waves for hours. “That was the most stressful time,” Metts said. “I was very uncomfortable.” Eventually they changed direction and sailed out of the storm. Nothing on the south Atlantic crossing could compare to that, Metts said.

When they reached halfway across the ocean, each made a note-in-a-bottle that they released to the waves. The notes contained their contact information, so if recovered, the locator can contact them and report where it was found. As they got farther across, they bet on who would spot land first. “That happened on my watch,” Smith said with a laugh. “I just kept peeping and looking and staring,” Smith said. Often high waves were mistaken for land. “I then saw this wave that never went away,” Smith said. It was the hills of St. Maarten. As they continued to sail, they spotted lights from the BVI. “It was really very nice to see land,” he said. “It was nice to pick up the phone and call somebody,” as they got within cell phone range. But instead of celebrating then, Smith maintained his composure to sail the boat toward their goal.

It was rainy as Smith took the boat through the waters near St. John on Dec. 20. 2016. The weather cleared up by the time they approached Mangrove Lagoon on St. Thomas. There they were met by a small welcoming party with one member blowing a conch shell to greet them. Among the crowd was Peggy’s smiling face. “Everything just went perfectly,” Smith said. “It felt really good.”

Crossing the Atlantic was a big accomplishment for Smith, whose first significant solo sailing adventure was as a high schooler sailing his 12-foot boat with a 14-horse power engine from the eastern end of St. Thomas to West End, Tortola –  and back.

Smith noted the irony of accumulating an additional 3,000 miles crossing the Atlantic. “If I were to go to a charter boat company, they would not rent me a boat,” he said, because he doesn’t have boat captain’s license. So, about that license. Smith has no desire to obtain one right now. But he is looking forward to new sailing adventures.