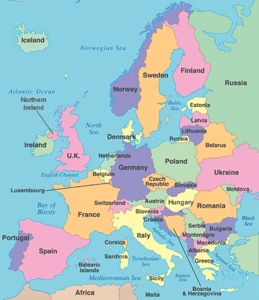 If six months ago someone had told me that I would be traveling to another continent, on a “buddy pass,” by myself I would have called them crazy. As a matter of fact, in retrospect, I am crazy, sort of. When my boyfriend invited me to go to Europe on a three-country tour with him and some friends, I told him that I would think about it. I pondered on it for a while, thinking that I won’t be able to find a sitter for my children and that my best option would be to pass up the offer. That was until I told a couple colleagues. One flat out said to me, “I didn’t know you were on drugs,” when I told her that I didn’t think I could make it. One coworker was especially optimistic. She kept telling me “you deserve it Nanyamka, and you’re going to go.” Every time she saw me she asked about how the planning was coming along. Every time I came up with an excuse, she found a solution. When she asked her regular questions “have you packed yet” and “so what sites do you want to see,” I dare not told her that I wasn’t sure if I was going, unless I wanted a scolding. Truth be told, it was because of this dear colleague that I made up my mind to go.

Eventually my boyfriend explained that he had secured buddy passes for the group, which meant we would travel for a fraction of the price – if we actually got on the plane. Buddy passes work on a stand-by method. If there are empty seats on the flight, pass holders get to fly, in order of priority. This was NOT what I had in mind for international travel. I mean, what would happen if all the flights were all full? But my boyfriend assured me that he would check the flights regularly and arrange my tickets through the airports where it was more likely that I get a seat.

Because of all this and the fact that I had so much going on at home and at work, I wasn’t excited about the trip. Actually, my friends and family were more excited than I was. That was until my boyfriend called from Paris. He went up two days before we did. At that moment I realized that this was a great opportunity and we would have a blast! And on that day, my ticket was purchased – two days before my departure.

The first leg of my flight was St. Thomas to Puerto Rico, but it was a regular ticket, not a buddy pass. In Puerto Rico, the agent told me, “just wait for me to call your name,” which gave me hope that I would get on my PR-ATL leg. In that flight I had the good fortune of sitting with a Virgin Islands couple who were heading back to Illinois where they live. We had an engaging, eye-opening, spiritual conversation. You know the feeling when God put you in a certain place at a certain time for a reason? Yep, I was meant to meet that couple.

The ATL-Paris leg didn’t seem too promising – I was number 12 on the stand by list – but I kept the faith. It just so happened that I met two of the other people in the group at the airport. We were the last three people called to board the flight. Whew, that was close. I had been mentally preparing myself for the eight-hours and 24 minutes flight. I don’t enjoy flying: sitting in a cramped seat for so long, the cold recycled air, being thousands of miles in the air with no control – I can go on and on. I respect airplanes and pilots. No matter how many flights I’ve taken, I still count it a miracle to be in a gravity-defying air-suspended machine. I pray hard every time I get on an airplane – whether it’s a 20 minute flight on the tiny Seaplane in the Virgin Islands or on a jumbo trans-atlantic flight. Because I had only slept for 90 minutes the night before, I hoped to catch up on my rest. Getting ready for international travel within two days was, well tiring.

I did rest a bit, but I had great entertainment. The Delta seat back multi media screens are awesome! I’m not much of a movies person. I prefer to read on flights. So before this eight-hour flight, I had never paid much attention to it. I had watched a movie or two on it, but never explored it further. This thing is amazing. Tabs features up-to-date movies, HBO, tv, music, games, sky kids and my flight. I watched “The Hangover II” and “This is 40.” For me, my flight is the coolest thing. There is a moving map that let’s you know, in real time, how many minutes you have to reach your destination and an map that shows the plane’s actual location. Channel 13, the R&B station was the bomb. Ok forgive me if I am going overboard with this, but all this time, I had no idea how cool it was.

The flight attendants are preparing for our second meal and we are scheduled to land in Paris in about an hour.