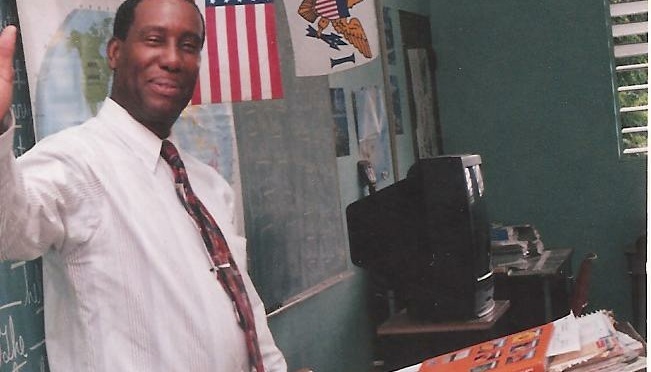 On April 21, while speaking to a cousin on my morning commute I mentioned frustration with one of my daughter’s teachers. The teacher just appears aloof and disinterested. She isn’t a bad teacher, per se. My daughter is learning well. But there is an emotional element simply missing from everything that she does. And I noticed it from the moment we met. But being new to the school and city, I betrayed my instincts that told me to to switch teachers and had my daughter remain in the class.

Our conversation took a turn when we both began praising a man, who had spent a year as our teacher but impacted our entire lives – Isborne Fredericks.

Isborne Fredericks is no ordinary teacher. He is a leader with the ability to touch students’ souls, see in them value that they never knew existed and get them to recognize that value – all while imparting stellar education. He has taught hundreds of students and I consider myself fortunate to have been one of his students when I was in sixth grade at the Joseph Gomez Elementary School on St. Thomas, Virgin Islands.

He was my homeroom and history teacher, and a true visionary. Long before Virgin Islands history was a requirement of the VI Department of Education, Mr. Fredericks created his own VI History curriculum. Our 11 and 12-year-old selves had to learn the executive leadership of the three branches of the VI Government. I still remember searching and calling people to complete my list of commissioners. Yes, we had to find the names ourselves, then still memorize them all. We often protested that we had too much work, but Mr. Fredericks always made us feel that we had the capacity to learn and produce even beyond his expectations.

He also imparted morals and values. Students were to treat each other with same respect as we treated him. He showed no favorites – the respect, grace and mercy that was extended to the best of us, were also extended to the worst of us.

Mr. Fredericks began preparing us sixth graders to be competitive in a global world. Azerbaijan, for example, is an Asian country that we learned about when many had not even ventured outside of the U.S. We also had to know how to spell it. Points were deducted for misspelled words, T’s left uncrossed, or I’s left un-dotted. Taking pride in our work, all the time, is something else that he stressed. He expected, rather demanded, our best always.

And then there was African history. We had to learn the countries on the continent and be able to identify a certain number of them on the map. We even began learning an African language!

As we wrapped up our conversation my cousin asked the whereabouts of Mr. Fredericks. I told her where he was and to look him up on Facebook. I encouraged her to share with him directly his impact on her life. Life is too short not to, I explained.

A few hours later I found out that Prince died. And so during this 2016 Teacher Appreciation week, I hope to honor Mr. Fredericks and all the teachers who have made a difference. Gomez Elementary School really set an unshakable foundation in my education and my life. Ms. Wilkes, Ms. Dominique, Ms. DeWindt, Mr. John, Ms. Christian, Ms. Freeman, Ms. Donastorg – if they shaped at least one life, they shaped mine.

But everyone at Gomez contributed.  How could I say that Cheryl Potter, Joan Dawson, Sylvia Woods (God bless her soul) were not my teachers? They never graded my papers or signed my report cards, but they taught me just as well. And l can’t forget the special subject teachers like Mr. Robinson, Mr. Dallas, Mr. Shaw, Ms. Rhymer, Ms. Carson…. Or substitute teachers like Ms. Brooks (sleep in peace) and the two Ms. Benjamins. The support staff also kept us on the right track. I can hear Ms. Sadie saying, “manners will take you round the world and back!”

Throughout my years in the public education system I’ve had extraordinary teachers. Ms. Morton’s seventh grade English class at Bertha C. Boschulte Junior High made me love writing. Mr. Monti’s math class in high school taught me patience. Then it was Jack Beauvais whose class helped me to find what I now recognize as my purpose. I wasn’t even supposed to be in that journalism class he taught at Ivanna Eudora Kean High School. I was in 10th grade and the class, I was told, was for 11th graders. But because I was in advanced English courses, I was admitted with ease. After producing a news broadcast for a project in Mr. Beauvais’ class, I knew I wanted to be a journalist.

I always tell people that in the Virgin Islands we have learned to make do without much. But we still achieve. We achieve in spite of – largely because of our dedicated teachers.