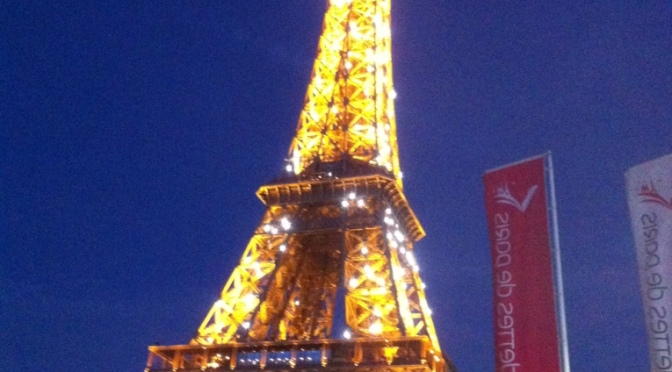 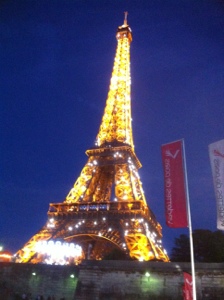 The Day of Awe
We had three big locations planned for our second day in Paris. It was Saturday and we decided to plan our stops more carefully as to not tire ourselves as we had done the day before. We planned on heading out around noon. But no one woke up until about 1:30 pm. We met up at 3 p.m. to head out. The first stop was Notre Dame. We had been using the Metro for getting around – a system I have yet to figure out. Living on a small island with no metros, it’s hard enough trying to figure out the system in New York or DC, but Paris was a whole other beast. Not to mention, I’m “directionally challenged,” as my boyfriend says. Praise God for the Metro riders in our group who took the lead.
I immediately liked Ile De La Cite, where the Notre Dame is located. There was something about the area that felt familiar and welcoming.

We stopped for lunch at an open air outdoor restaurant before making our way to the cathedral. I was in awe upon seeing the Notre Dame. It looked so huge and powerful. The architecture and attention to detail were magnificent. Within the walls of the Notre Dame were hundreds of intricately carved faces. The inside of the Notre Dame was dark and a live mass was in session when we entered. As we walked deeper into the building there were dozens and dozens of small lit candles. Along the walls were spaces dedicated to saints. As we passed to the far right of the pulpit, the scent of Frankincense and myrrh was overwhelming. I felt like I was transported to a few centuries in the past. My boyfriend was creeped out by the Notre Dame. While I reveled in the history, he wanted to leave. We left the inside of the Cathedral and headed to the side so that we could go to the top of the massive church, but the line was too long.

We headed for the next stop on our list – the Luxembourg Garden and Palace. I am used to seeing street performers in train stations. In Paris we saw a whole band! In one metro car there was a violinist with a moveable amplifier and taped accompaniment. We got up, started dancing and began a cha-cha line on the train! Before I knew it, strangers had taken out their cell phones to capture us. I just hope we don’t end up somewhere on the internet!

The Luxembourg Garden was beautiful. I immediately envisioned lavish outdoor weddings being held there. When we reached the middle of the garden, a few people in our group stopped for crepes. We saw the wrap for the crepes made to perfection right in front our faces. We rested for a bit while our friends enjoyed their warm snack. For the entire day we were careful to take our time. We wanted to be fresh for our most anticipated stop.

A good friend suggested that we visit the Eiffel Tower later in the day so that we could have the experience of seeing it in the day and the night. That was the best advice.
As we headed toward the revered monument our pace picked up the closer we got. We had a new sense of urgency and a new burst of energy. Then there we were, a few hundred feet away from the Eiffel Tower. It was surreal. And like all good tourists, we stopped to take pictures. When we reached to the bottom of the tower, all heads pointed to the sky staring at the structure. It was gigantic. I gained a new respect for 19th century engineers. As with all other structures in Paris, it was intricately artistic. I just kept staring at it. We soon got in line to go into the tower. It was a long line and the estimated wait time was two hours. Honestly, I wanted to wait to go inside of the tower. The group decided to head to the Seine River for a river cruise. The sun was setting and the Eiffel Tower was lit. It was beautiful. It was dark by the time we got on the boat. And without warning, the Eiffel Tower started to dazzle with sparkling white lights. It was magnificent! Us on the water and a dazzling Eiffel Tower! The night had cooled down considerably and I was chilly. Our boat trip was romantic. I was intrigued with the detailed carvings on the bottom of the bridges and the rich history of the city.

When we got off the river cruise everyone was hungry. Or group had various diets. I am vegetarian. Three of the group were pescetarian (they eat fish but no meat or poultry). Two in the group ate anything. It was almost midnight and we needed a restaurant that could satisfy everyone. After reading the menus from a few restaurants, we settled on this one spot not far from the Eiffel Tower. I wish I could remember the name, because there I had the best meal of my entire trip – a goat cheese ravioli. The server was friendly and worked hard to meet the needs of my pescetarian friends – who insisted that their “smoked salmon” be cooked. By this time, the men in our group were hungry and borderline “angry.” They knew what they wanted and they wanted it done correctly. Most of us had not been impressed with the food in Paris so far. But tonight everyone enjoyed their meals. It was the bill that surprised us after we had filled our bellies. A glass of Coke was €9. That’s almost $12 for something we easily buy back home for $2 at the maximum. The guys also decided to get extra plates to go, since it was their best meal so far. I won’t tell you about the rest of the bill. Let’s just say the owner of the restaurant would be happy.

We left the restaurant in a walk/run mode to catch the train back to La Defense. We were told that the last train left at 1 a.m.

Last Day in Paris
On our last day in Paris we decided to head out to the Lafayette Mall, buy souvenirs and explore the surrounding La Defense. It was Sunday an I was totally disappointed that the Lafayette Mall was closed. I was so disappointed that I wanted to go down to see for myself. Instead we headed to the nearby Les Quartes Temps Mall. It was there, in the food court that I had the best drink ever – the Josephine Baker. It was a frozen smoothie-like drink made from passion fruit, coconut and mango. The drink surely did justice to our ultra sexy icon.

Later we hit the Charles De Gulle Place for souvenirs. That evening we had some packing to do. Our next stop was London!

One thought on “Chronicles of an Island Girl’s First European Adventure: Paris Part 2”