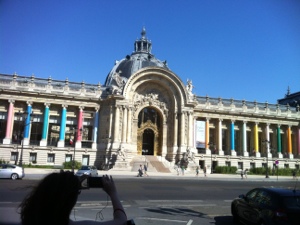 Too Much to Do; Too Tired to Do It

When we landed in Paris it was dawn. It was about 8:30 am when we got to the Renaissance Hotel in La Defense. My body was on the 2:30 am time that it was back home. I was tired. The first thing I was interested in doing was sleeping.

I got about 4 hours of sleep. The group decided to meet at 1:15 pm to set out. We left from La Defense and headed out by foot, not quite sure where we were going. Right outside of our hotel was the Grande Arche De La Defense, that we decided to bypass since it was so easily accessible. The day was hot. But a cool breeze made it nice. Our first stop was Arc de Triomphe – a huge arch of whom history I still don’t know.

From there we did plenty walking downtown at Charles de Gaulle. High-end stores, open air baristas and souvenir shops lined the streets. We spotted some Ferraris and Maserati’s cruising down the street. Then we noticed some parked at the side of the road, offering anyone with a driver’s license a 20-minute drive for a fee. It was €89 to drive the Ferrari. The men in my group were tempted, but reasoned that they’d like to blow out a Ferrari on the open road, not creep on crowded city streets.

We stopped for lunch at Leon de Bruxelles, whose specialty is mussels. The place wasn’t too vegetarian friendly – I made do with a small salad and cheese croquette – but those in the group who had mussels said it was the best. Service was a bit slow. But in the end when we tabulated our bill we included a 15 percent tip. One guy in the group gave an extra €10 for good measure. Needless to say, we got the most enthusiastic farewell from a waitress ever. Later a waiter at another restaurant told us that tipping is not mandatory in France and there is no pressure on customers to tip unless they had excellent service.

On the walk from the Arch downward, the further away we walked from Charles de Gaulle Place, the more we noticed Paris’ amazing structures and landmarks. There were lots of intricately carved structures and monuments. Unfortunately the city was not as tourist friendly as expected. While everything was written in French, we had hoped to meet some informational guides who could explain some of the awesome things we were seeing. Trust me, we were armed with maps and guides, but they were not enough. The language barrier didn’t help. Most Parisians didn’t seem approachable.

We kept walking in search of the Louvre Museum, then low and behold, shooting up to the sky from behind a canal, we saw the Eiffel Tower in the background. Cameras came out in an instant. We posed and posed some more. This was the epiphany of Paris. It was the ultimate must-see thing for the group – we were so excited. The day was really hot. So we stopped by a mobile vendor, at first to buy some water, but ended up buying homemade ice cream too. “Not that powered Haagen Das they try to fool you with,” the owner told us. He “used the real vanilla beans” in his product, he said. His gelatos were perfected over four generations of gelato making, he said. And he was right. They were excellent. He had a mango gelato that tasted like the freshly picked fruit. By far the friendliest Parisian we had met, he went on to tell us he grew up with black people and had black friends. He even gave us a raised closed fist salute while saying “fight the power.” We all looked at each other and smiled. He was the first person in Paris to make us feel genuinely welcomed. The sighting of the Eiffel Tower and our new-found friend really made me feel good as we headed to the Louvre Gardens and Museum.

By the time we reached to Louvre Gardens we were all tired. We rested for a bit under some trees and had to really convince ourselves to continue the journey, for after the Louvre, we planned on going to the Eiffel Tower. We reached the Louvre hoping for some cold A/C to revive us. The air conditioner could barely be felt. I had observed a pattern in Paris. The A/C in the hotel was at a minimum, the air on the metro was almost non-existent, now here in this museum we were sweating. Is this Paris’ way of saving energy and lowering its carbon footprint? We didn’t get the reprieve we had hoped for and were too tired to even walk around. It was a long day. We plotted out way back to the hotel, and saved the Eiffel tower for a next day. When we got back to the hotel it was around 8 pm. I needed to sleep badly. By 1 am I was wide awake. Go figure. My body was still on Atlantic Standard Time.

If you missed the first episode, read it here: Chronicles of an Island Girl’s First European Adventure: Getting There 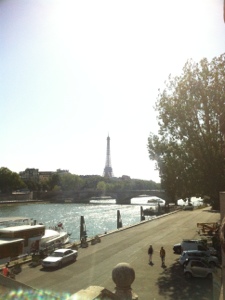